With the Legacy system unrolling with 1.2 there are plenty of perks that people can now get. These range from social emotes to unarmed combat attacks to items you can get for your ship. As I’ve been working hard on crafting as of late I decided to get the ship repair droid. The reason wasn’t for the convenience of repairing gear on my ship. But rather because the droid also allows for sensor units to be sold which can make C2-N2 or 2V-R8 more useful in crafting.

I kind of wish he had a neater name. But oh well. 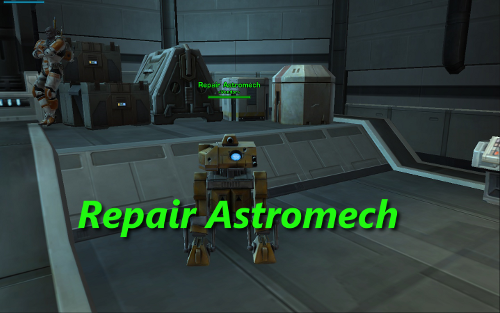 In order to get him on your ship (for all characters on your legacy) requires Legacy level 7. And (cue Dr. Evil close up) One Million Credits. He can be purchased directly from the legacy perk screen. I spent 30 minutes running around the fleet and Coruscant before I realized my ignorance. 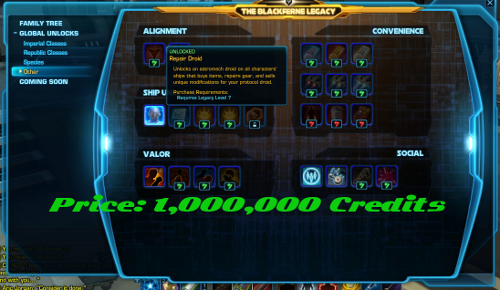 Press Y for Legacy tab and go to Other subsection.

Why you Want Him

If you aren’t crafting or gathering you probably don’t unless you like to show off that you had the money to buy him at some point. However for the crafting minded. 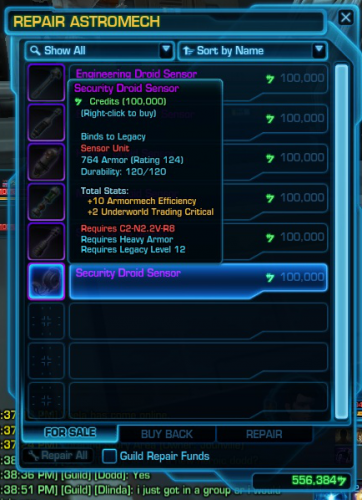 The cost of each sensor is 100,000 credits. So yes you just paid one million, and now you are forking out more money. C2-N2 better be grateful!

The full list of sensor units is as follows:

A quick reminder. Efficiency just means they will do those kind of tasks faster, while critical increased the chance of a critical success. Critical success on armor and equipment means an augment slot, while on a gathering mission usually means a higher yield.

When you equip the sensor unit the bonuses will not appear on the crew skill screen. 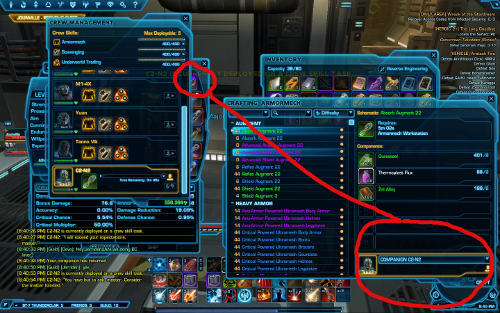 I assume at this time that is a display bug, but I have tested out the efficiency bonuses by taking the same mission with and without the sensor unit equipped. The efficiency bonus works, so I assume the critical bonuses are there too. The sensor units are bind on Legacy so if you swap out crew skills or want to help jump start an alt’s crew skill grind you can drop it in the mail and save yourself 100k for that specific type of sensor unit.

Now if you don’t have a million credits or Legacy level seven there is an alternate method to get the sensor unit, but not the droid itself. Find someone who has the droid already and get on their ship. You can access the vendor once on board, buy the sensor unit and equip it on your steward droid. You will still have to pay the 100k credits, but it is a much easier financial pill to swallow than the one million.