The Case for Operation Players

Alvis jokes that I’m either fresh off Ord Mantell, the Pajama Tank or an extra from Logan’s Run because I wear crafted gear that looks much like low level trooper gear. But I do this for two reasons. First it is an individual look you don’t see many 50s sporting. Second and more important in an operations sense, is that I’m getting more out of my gear than people who wear the Tionese, Columi, or Rakata gear as is. Here are the screen shots to prove it. 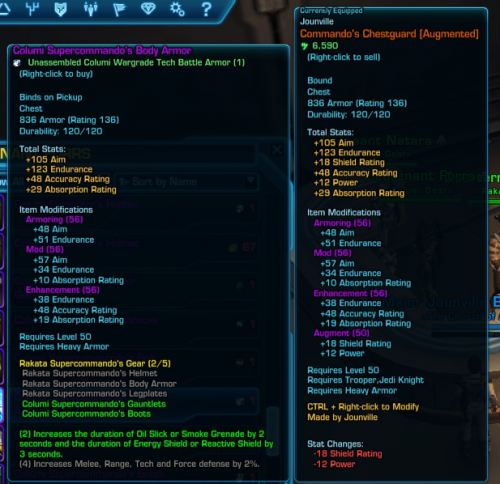 Columi from the vendor versus my crafted gear

So as you can see on the chest piece I have all the same stats PLUS I get an augment slot which is adding 18 shield and 12 power to my totals. 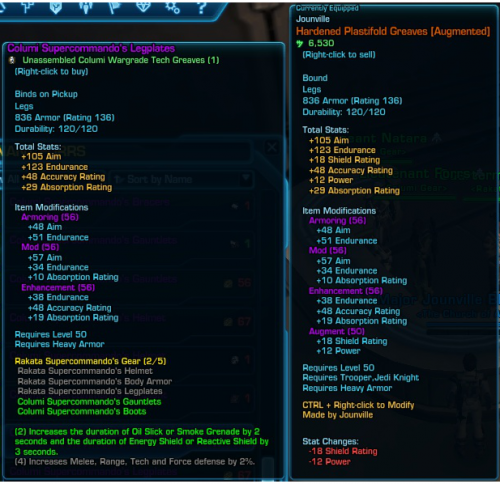 Same story on the legs as on the chest. 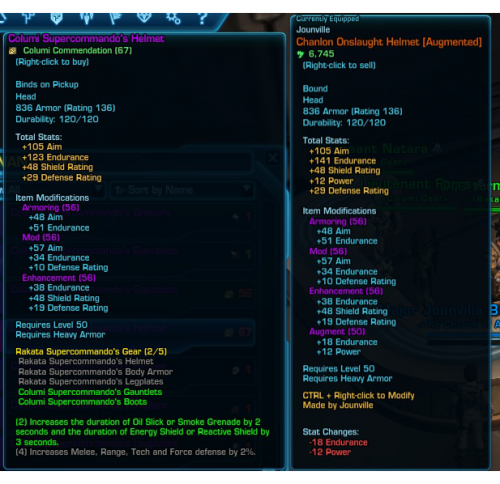 Same story on the headgear.

So the only thing I’m not getting are the four piece set bonuses. But that won’t be the case starting with gear after the Rakata tier of gear. So for some extra cash to strip the armoring, enhancements, and mods out of your hard earned raid gear, you can upgrade your operations or PvP sets with an augment in four or five places.

Currently I have orange chest, head, legs, and blaster rifle. Each has an augment slot with nets me an extra 72 points on one stat and another 48 on another if you stacked them. My wife has a sentinel which has allowed her to get an augmented mainhand and offhand piece giving her 90 extra points in one stat and 60 extra points in a second stat than she would get off of operations loot otherwise.

Yes it is expensive every time you loot something you are paying a lot to strip the mods, but what you gain is more stats and more of a defined look instead of a potential mismatch of gear sets.

So now that I’ve won you over to the power of augmented gear it can be a bit daunting to figure out the best way to get it. First you should really sit down and figure out which set or blend of sets you will be happiest with. I Play Swtor did a summary last month of all the craftable orange sets. Notably missing is the Valor sets they added for 1.2 and it doesn’t list augmented weapons. However the list shows you pretty much every other set in the game at the moment. These sets include Chest, Legs, and for anything higher than level 15 headgear.

Take the time to search for images of what this gear looks like. Seek out armormechs or synthweavers who have these schematics in your guild or on your server and have them link the items so you can see how it would look on your character.

Once you settle on the set look you like now comes the choice. Either you can stalk the GTN waiting for one to show up augmented and pay the price listed (ranges in my experience from 80k-500k depending on the item, server, and crafter) or commission one to be made from a crafter.

If you commission one you need to understand that you are taking the crafters companion’s time and that it takes several attempts of crafting an item before one gets an augment slot. This will eat up a lot of resources, but the good news is that the resources it eats generally are pretty easy to get. There are no Biometric Crystal Alloys or Mandalorian Iron materials in any customized gear I’ve seen so far. The crafter may ask for you to supply materials or they may roll the material costs into the agreed upon price. Either way you can get what you want in a timely manner.