The Church of Alvis kills Soa on Normal

ETERNITY VAULT, Belsavis (AP)- Long time Galactic Menace Soa the Infernal One has been killed at the hands of the Church of Alvis. The squad known for precision operations, reckless drinking, and inappropriate behavior at children’s birthday parties has done it again. A mere two days after the Church took down Karagga the Unyielding, the Church struck a blow at blowhards everywhere by taking down Soa.

“I’ll be honest. This feels great. I’m very proud of our boys on this one.” Major Jounville Blackferne said after the raid. “I was worried about having to main tank this bastard, but I managed to drink away the afraids and put on my big boy pants.” 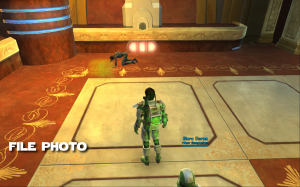 Jounville Blackferne looks at a servant forced to clean up Joun's vomit after drinking speeder coolant on a dare.

The strike team consisted of Jounville, Darrec, Dashl, Devo, Dodd, Furiel, Darklinda, and Bulwark.Major Furiel Plush was also elated saying to the fallen Soa “What now? Huh? Without those bugs you aren’t so powerful are you?!” at which point Soa challenged Alvis to a rematch on hard mode. 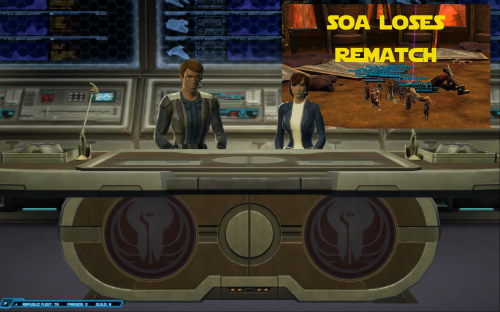 Soa the Infernal One is still dead.

That did not go well for Soa. Alvis swapped out Darklinda the smuggler for Dlinda the shadow. Marrkin and guild friend Romily of Snark Side fame stepped in for Dodd and Bulwark who had other commitments. The roster changes didn’t matter as the Church slapped Soa back to the floor.

“How do you like me now? Huh?” Furiel shouted at the fallen Soa who lay in a crumpled heap on the floor.

The second team celebrated their victory by trying to avoid the plague at Karrick Station.