One of the cultural touchstones of the Church of Alvis back in Star Wars Galaxies was our Church Picnics. These were large romps where 20-40 people grouped up and did a scorched march across Yavin or Dathomir. The game allowed for that by the nature of being a “sandbox” game. One of the challenges of SWTOR for the Church has been to find activities that people of all levels could participate in like the picnics of old.

Luckily for us there are the Datacron hunts. There are too many to do in one night, so targeting a planet or two in one night allows lots of people to come out and have fun with us. Last Sunday we went to get all the Tatooine and Nar Shaddaa datacrons. 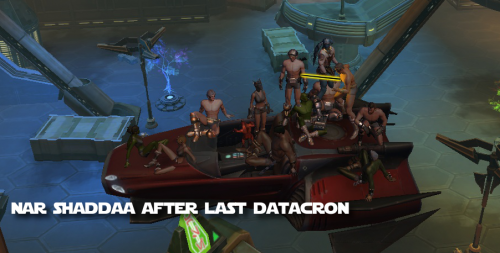 As is our tradition, when we can be in our undies, we go in our undies. We traveled across the Dune Sea in a shirtless biker gang, showing off our hawt bodies for all to see. We had fun time running from datacron to datacron in the buff. We have found that going as a posse makes it easier since we can help each other with things by using trooper harpoon or sage rescue to pull people up to hard to reach ledges.

In addition to collecting datacrons and having a silly time we did take down a world boss partially clothed. 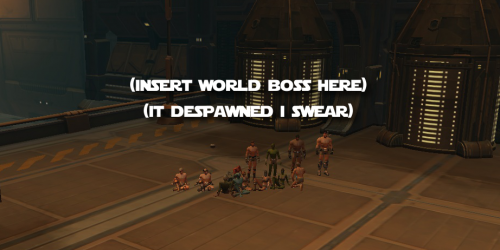 Unfortunately getting people lined up for a screenshot took longer than the despawn time after it was looted. I blame the booze on that, but I swear it happened!

One of the big challenges in a level based MMO like SWTOR is finding a way fro max leveled players and leveling players to do things together. The datacron crawls are a good start and I hope Bioware can make more things like that to allow for interaction between end game players and more casual players.

All in all a very fun night with lots of fun, and apparently some scandalous screenies of my crotch in a gunslinger’s crotch in an attempt to get up on a sand crawler are floating around.