Games always get compared to other games. Checkers and chess get compared since both are played on board with 64 squares of alternating colors. Hearts, Bridge, and Spades get compared to each other as they are four player card games involving tricks. So it is natural that Star Wars the Old Republic is going to be compared to other MMOS. For SWTOR there are two that will linger around for comparison for a long while after launch. First is Star Wars Galaxies and the second it World of Warcraft. The interesting thing to speculate on is what lessons Bioware has taken from these two games.

The comparisons are easy to draw. Both are part of the same universe. Both are MMORPGs. Both have huge expectations at launch about their ability to change the genre. But Galaxies has plenty of lessons I hope Bioware has taken to heart and employed in their game. First is that having a finished product matters. Talk to anyone who played SWG at launch and they can no doubt tell you stories about having to find work-arounds for various issues of gameplay that weren’t fully tested and fixed before launched. For crafting a common one was having to be very careful with how much money you put in your harvesters because if you screwed up you could lose a lot of credits or your harvester. It was a very careful game of balance. In combat things that targeted the mind bar were generally viewed as the best so there was a whole slew of flavor of the month templates all focusing on getting the biggest bang for your buck on attacking the mind pool stat of mobs and other players.

But after the bugs and the slow pace by which SOE fixed them, there is a lesson about content. SWG was a great game for sandbox type players, and as far as a player driven economy there are few that are in the same league as SWG. But there were a lot of Star Wars fans who came in expecting a story, and were disappointed in the lack of things to provide the Star Wars experience. MMOs tend to plot somewhere on the spectrum of pure sandbox to pure theme park. Sandbox is about world building and interaction while theme park is go see the sights everyone else has seen, get your digital “I slayed the rancor at Jabba’s Palace and all I got was this lousy t-shirt” badge. I think SWG was too sandbox for many Star Wars fans who were used to games providing a story for them. The question that pops up for me is whether an MMO with an established lore from another source (movie or book) can really be a sandbox MMO? I’d venture to guess they have to err on the side of themepark, or you get the fan base, that came to you because they love the source, disappointed at the lack of things to do.

Finally the last major lesson from SWG is the importance of community. SWG veterans wear that fact like a badge of pride. They look at less buggy games and think, “They don’t know the horrors I’ve seen.” Despite the lack of content, or maybe because of it, the players of SWG bonded and formed a real and honest to goodness online community. The fact that Alvis is still together after 8 years is a testament to that. And we are just one of many SWG guilds reforming for SWTOR. But with the development of a solid community, you also have to communicate and work with that community. Many SWG vets left at the launch of the NGE in 2005 because they saw the NGE as a betrayal of the trust the community had put into the developers. I sometimes wonder if the NGE had been the game that was there at launch if people would have liked it better. Ultimately we don’t know, but we do know that players who had invested time and effort into their characters over two and a half years felt like they suddenly didn’t have the same game anymore. And the developers lack of communication leading up to it was a major scandal.

Lessons from World of Warcraft 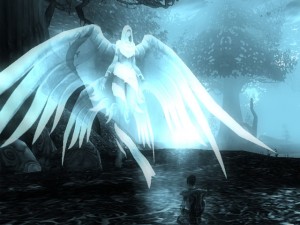 For as much as people think that Star Wars should be compared to Galaxies, it is going to be compared more to World of Warcraft. Since its rocky launch in 2004 WoW has grown into the 8 ton gorilla in the MMO market. In fact WoW’s success has had some industry commentators muse that they crowd out other games to the detriment of the genre as a whole. I don’t know if that is true or not, but I can say that they definitely raised the bar of what players expect from an MMO.

Customer Service is important. The rocky launch had some people not able to play for days or even weeks at a time. Blizzard responded to their screw ups with, you missed playtime we’ll give you playtime. That was something that wasn’t exactly common back in 2004. But since then the Blizzard customer service has been rather good, even accommodating to players. When accounts were hacked by gold farmers, Blizzard generally was pretty quick to get the player “whole” again. My wife’s account got hacked, and she missed a raid, but overall it was a decent experience. People who were hacked multiple times, refusing to get an authenticator, were still made whole time and time again despite the stern lecture on account security from customer service.

Polish goes a long way. Personally I started playing WoW one year into its life span. So I don’t know first hand about the rocky experiences, but I do know that in November 2005 when I started playing I was blown away by the fact you never had to find a workaround for doing what should be routine activities for your class or profession. Since then the polish has gotten better with each expansion to the point where looking back at Vanilla WoW I’m amazed that we put up with some of the dumb quests we had to put up with. QA clearly matters and if you don’t have serious or widespread problems with a patch or an expansion people tend to be more patient about waiting for the next bit.

You will have casual and hardcore players and you can’t ignore either. Blizzard for all of their polish has not been without fault in their run. The original raids were a nightmare to organize with forty people and the number of people who saw Naxrxamas in Vanilla was a tiny portion of the population. Their initial solution to that was to make raids smaller and so the Burning Crusade was more accessible for the first tier, but the higher level dungeons weren’t seen by many people either so their expansions chief bad guy most people hadn’t seen at all. Wrath of the Lich King seemed to find the solution by making the villain pop up all over the place and it was widely regarded as a pretty great expansion. It took time, but Blizzard seems to have found a way to give casuals a way to see almost all the content made, but still giving the hardcore the ability to get shiny toys for their accomplishments.

Will Bioware Learn These Lessons? 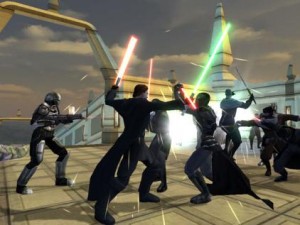 It is impossible for me to know for sure if Bioware has learned the right lessons from their MMO ancestors, but we have a lot of reason to suspect that they have.

Bioware enjoys a reputation among game developers that is top notch. When you ask most gamers what Bioware, Blizzard, and Valve have in common, the response is usually something to the effect of “They will not release a product until it is ready”. It is amazing what kind of leeway gamers will give developers with that kind of reputation. Most of Alvis is very very eager to get their hands onto this game. We read about it, we obsess over the latest tidbit said at a con or a Friday update. But almost everyone I’ve talked to has said something to the effect of “I’d rather wait for a finished game, than pay to beta test a broken game.” Bioware has been very clear that they want to make sure that launch goes smoothly, that the game is complete, that it runs well, and that the bugs are gone before 12/20/2011. Their reputation is on the line and they know it.

The second main lesson revolves around content. Since they announced the game they have gone on and on about how they are really giving “story” the center stage in this mmorpg. If they needed a tag line it would be something to the effect of “SWTOR: Putting the RPG back in MMORPG”. Podcasters have joked “I don’t know if you’ve heard, but apparently this game has story.” If they pull this off it will be a new bar for the genre in a significant way. I’ve been playing WoW for almost 6 years and despite killing the Lich King, and seeing most end game content for years now, I never really knew why we were doing any of the things we were doing. I mean I guess that guy in that castle/cave/palace is a bad person, and he needs to be stopped, but I was in it for the game play not the story. If Bioware has succeeded it will add a whole depth to my game playing experience in that, not only will I do things because I like the game play, but I genuinely care about solving story problems. That has the potential to up the genre bar the same way WoW did.

The final lesson is about community and communication with the segments of your player base, and this is the part we can’t know for sure for a while. Ideally Bioware has gotten the resources lined up and the ability to help customers feel like the company values their subscription. And hopefully Bioware has fun activities for the whole spectrum of players. PvPers, raiders, crafters, socialites, and altaholics. If they do, then the player base can settle as a solid community. There are many promising indications this is already happening. Devs are very interactive already with players. They work with fansites, blogs ,and podcasts on a regular basis. They seem to get that people are excited, and that working with the community goes a long way towards having a lasting community.

Bioware has had lots of tests thrown its way. It has to prove it can be a viable game and succeed where a whole list of other MMOs have failed. They have the potential, they seem to be learning from other people’s mistakes. If they live up to their own expectations they could emerge out of SWG and WoW’s shadows and become a giant of their own.