Author Note: (I can’t take all the credit for this, a lot of it involves a thread of discussion as well as input from other Alvians as well, particularly Furiel. This is just my take on it.)

—The Jedi Code (Based on the meditations of Odan-Urr)

Most Jedi within the order throughout history have argued that the Jedi Code, in and of itself – is complete and final, and requires no further clarification. Sadly, this dogmatic belief lies in thousands
of years of passing down the teachings through Knight to Padawan, with little questioning. It is true, questioning the will of the Force as it relates to the Jedi Code does in fact, go against certain Jedi traditions. Traditions and rituals were set into place to facilitate the learning process of the force and the training of Force-sensitive individuals throughout the ages. However, one inevitably realizes that tradition and rituals cannot destroy ignorance, as these concepts are not mutually exclusive. The Force is
an ever-unraveling truth which ever grows, evolves and changes fates of sentient species, on an ongoing basis, and throughout time immemorial.

Throughout history of the galaxy, there have been many Jedi who have been pioneers in their own right. Questioning dogmatic beliefs and searching through years of unquestioned traditions, they have
carefully been exposed to more subtler aspects of the Force. And while many experts have agreed that the Light Side is less seductive and leads to greater peace, many Jedi have confronted the Dark Side and through their attempts of learning, gained some degree of control without being completely consumed by it. Darth Revan, Luke Skywalker, Mace Windu are a few within recorded history, as examples.

Another undocumented account was handed down through word of mouth and widely debated was through the teachings of Alvis. Historians have debated whether or not he was truly Force-Sensitive and the impact his teachings have had on the Jedi Code. Many historians have sadly written off his teachings as the ramblings of a drunken sociopath. There are a few Alvian purists however, who have learned to
embrace his teachings and incorporate them as their own moral code. A very small but growing sect within the Jedi Order also embrace these teachings and have reconciled them to a degree where they are one and the same. They are sometimes secretive of their devotions, sometimes overt, and most of the times unpredictable, but all share in their unwavering adherence to his supreme principles of drunkenness and vengeance. 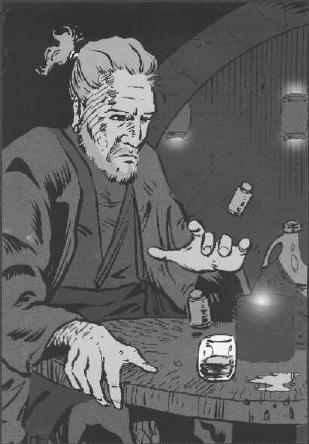 The key to understanding the Jedi Code as it relates to Alvis’s teachings, is balance. Balancing the will of the force, which occasionally warrants vengeance.

The biggest thing that most people overlook about Alvian vengeance is that Alvis’s vengeance is JUST. And that sense of justice is where both the Jedi Code and the Alvian Code merge. Being drunk and
violent can be fun, but the vengeance as Alvians do is payback to those who have done injustices to the will of the force in and of itself. And it is worth mentioning those injustices do not always materialize as injustices ones done to devotees of Alvis, but also to those who cannot exact said revenge themselves. Thus the Jedi uphold this part and protect the will of the force, in and of itself.

So ultimately, Alvian Jedi may be viewed as more extreme and violent than a typical, run of the mill Jedi, they do share a strong belief in righteousness and justice, be it their own unique distinct brand of
justice, and the Jedi order does secretly turn a blind eye to those who would do so as having Alvians on their side would be viewed as an asset, especially in times of injustice as was the case when the Republic was under the invasion of the Sith.

Jedi historians speak rumors of an ancient Jedi prophecy, which originally stated that Alvis’s drunkenness and revenge will eventually bring balance to the force. The influence of alcohol on
midichlorians has been noted as miraculous as it agitates the cells within a receptive mind and allows them for a furious and tempestuous rage, often misinterpreted as violence. The true nature of alcohol
on midichlorians…is Revenge.

Dood Fromeianna is a Priest for the Church of Alvis.