Darth Hater has an interview with SWTOR Lead Writer Daniel Erickson in which he better flushes out how crafting will work. The minigame seems considerably less grindy than what is currently available in WoW, and reminds me a bit of factory and harvester use in SWG. The basic choice is shaping up to be how to best utilize your labor force. 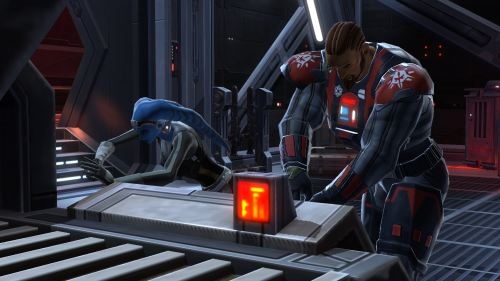 The companion system will provide players with a series of choices on how to maximize their output. This output covers not only crafting or gathering items, but also their viability in PvE or PvP situations. Allow me to better illustrate. I want to preface that I have no special knowledge of Bioware’s intentions, but based on this interview, and all publicly available information this seems very much what they are signaling towards.

For simplicity sake let’s say you have three companions. In a combat setting they are a tank, a healer, and a damage dealer. This provides the versatility in combat they have often cited. Your group doesn’t have a healer, everyone brings their healer companion. Now these companions will also have various non-combat skills which they can utilize. Let’s say the tank is a great gatherer of stuff, the damage dealer is awesome at the diplomacy stuff, and the healer is a wonderful crafter. Whenever you take one with you to a combat setting be it a flashpoint or a warzone you are leaving the other two behind. If you continually rely on one companion you will limit how much time they spend doing those other things. So it would be really easy to see a player who relied on a crafty/healer companion having great success in maximizing their diplomacy games and resource gathering, but having less success in being a top tier crafter.

I predict that some guilds who want to co-operate for greater economic success will coordinate who brings which companion types to maximize an interdependence among people. The guild leader may always bring their crafter to flashpoints, so as to maximize gathering materials and diplomacy, but funnel those materials towards a guildmate who always brings the gatherer companion to flashpoints, leaving their crafter on the ship making items from the guild leaders materials.

Obviously there is a lot of complexity left to be revealed, but the core minigame mechanic for players to consider is how to best optimize their companions “work” schedule. Players who can plan ahead their play time will be in a better position than players who are constantly deciding what to do on the fly.