I wanted to take a few moments to summarize some of the activities the Church has been up to lately.

Jeezbus was the first Alvian to 50 and since he hit that milestone in late december we’ve had several other Alvians hit the big 5-0 with quite a few coming up quickly. As of this writing Alvis has 15 fifties who regularly run flashpoints and dailies together. 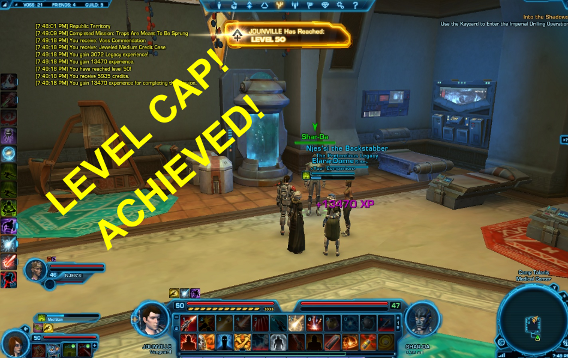 On January 28th we promoted the following people from Altarsquid to full blown Priests within the Church. There was a simple ceremony on the Fleet followed by a Sarlaac jump and some PvP with our friends over at Unrepentant and Archaic. While they may have landed a few shots on us, we put up a valiant fight.

Yim'ays and Devo valiantly fight for drunken vengeance on behalf of their fallen Archbishop.

On Feb 11th, Jounville, Veela, Qwuaff, Bulwark, Yimayz, Klak, and Dashl set out on a great Datacron hunt covering Ord Mantell, Tython, Corellia, and everyone’s favorite post apocalyptic wasteland Taris. We were able to get to eevry datacron on those planets even though some were much harder than others. There are plans to tackle more planets in the near future.

This past weekend the Church of Alvis struck a victory for drunken vengeance in the Eternity Vault. We managed to get to Soa to phase three in our raid. No doubt he will fall next time we set foot in there. Here is our first attempt and kill against the Annihilator Droid with our actual ventrillo chatter!

Our raiding will continue. More people will be hitting 50 which means more flashpoints, more dailies groups. Our next crop of altarsquids are getting ready for initiation and we are going to be doing more datacron crawls. March and April will be exciting for all Alvians as we delve deeper into this galaxy far far away!