Does this describe you?  You have just finished the last bonus quest on Taris.  You are ready to leave that planet and its horde of rahkgouls behind.  Suddenly, a persistent itch presents itself at the base of your skull.  Something is missing.  A quick look at your codex reveals your sense of deficiency.  There are things you have not seen, people you have not met, and lore you have not read.  If you cannot relate to this feeling, then congratulations, you are most likely a healthy well adjusted individual.  Otherwise, you are a filthy, filthy codex whore. 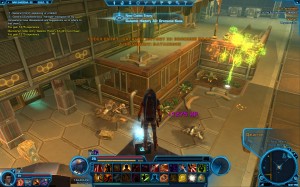 I have only ever played two MMOs: Star Wars: Galaxies and Star Wars: The Old Republic.  The games approach exploration in vastly different ways.  In the Galaxies sandbox, you had vast open vistas that, while often presenting nothing more than a pretty view, offered the hope of discovery.  As a theme park game, The Old Republic often rewards exploration with big red barriers.  So I see the codex as Bioware’s attempt to throw us explorer types a bone. 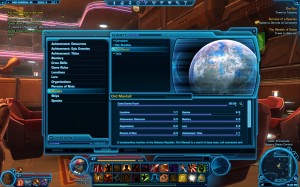 The codex encourages exploring areas on the map where no mission icon exists.  It tempts you to take on that champion mob to see what may be hiding behind it.  Loot is secondary to discovery.  However, the codex can also be maddening.  Datacrons, for example, reward exploration with stat bonuses, but require a level of jumping dexterity that I seem to lack.  Oh, Super Mario Bros, did I learn nothing from you.  It also drives you insane when a codex entry is bugged.  I must have travelled the entire map of Ord Mantell five times searching for those last two species entries that were impossible to find. 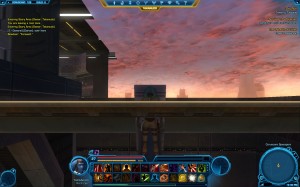 I like to poke my head in strange places

And yet, my futile attempt to complete the codex entries of Ord Mantell introduced me to my next obsession: completing the world map.  It is always fun to see all those little hexagons disappear from my word map once I have visited every area on the planet.  The bit of XP I get, does not hurt.  Even this has bugs, though.  The only way I could complete the world map on Coruscant was to poke my head through the roof of the starport. 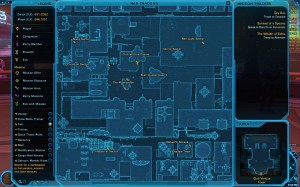 Those of us who score a 100 percent explorer on the Bartle Gamer Psychology Quiz will find their options limited in Star Wars: The Old Republic.  Thankfully, Bioware has given us a couple of outlets. We have become filthy, filthy codex whores.