The key figure in the three cinematic trailers they have released for the game has been Darth Malgus. From the first time we saw him in the Deceived trailer we realized he is a force to be reckoned with.

What the novel does is flush him out more than just a force of rage slaughtering Jedi left and right.

For anyone yet to read the book

and wanting to avoid spoilers

Darth Malgus is primed in this book to become the first main villain we see for Star Wars the Old Republic. He hates the Republic with a passion, and thinks only through conflict can one understand the force. When the brilliant attack on the Jedi Temple is the first and only notable attack on Coruscant, he finds himself feeling betrayed by the Empire he fights for so fiercely.

During the attack he duels and slays Jedi Master Zallow which sets another main character in motion.  Jedi Knight Aryn Leneer feels the loss of her master and is restrained by here peers on Alderaan from doing anything to disrupt the fragile peace talks. When the attack on Coruscant becomes known the Empire uses it as leverage to gain concessions in the negotiations, but it also send Jedi Aryn on an unofficial mission of her own design to find out what happened to her master, and seek revenge.

Meanwhile an ex-Havoc Squad soldier turned Smuggler named Zeerid Korr find the latest job to be a bust and his debt to the Exchange getting deeper and deeper. The Imperial blockade on Coruscant presents a game changing opportunity for him. The Exchange has a type of spice called engspice which chemically alters the addiction to make customers loyal to that brand provided they keep taking it frequently. The blockade has upset the flow of engspice to Coruscant and the Exchange is in a position to lose a lot of customers, to either sobriety or worse their rivals the Hutts. If Zeerid Korr can get a shipment to Coruscant he not only will be cleared of his debt to the Exchange, but also ahead a good amount of credits allowing him to have a normal life with his disabled daughter who is confined to a wheelchair.

The Hutts have a mole in the Exchange and send their man Vrath Xizor to intercept the engspice thus freeing up the junkie market on Coruscant to the Hutts. He is a former Imperial Sniper, and is extremely cold and calculating.

The novel traces the path these characters take all ending up on Coruscant. Vrath and Zeerid’s story feels like a spy novel with a good deal of cat and mouse. Jedi Aryn reads like a typical revenge story, and she meets up with her old pal Zeerid to sneak into Coruscant. There is a very good shootout in the Starport on Balmorra before they head out into the final main arc.

While those three characters are interwoven, Malgus finds himself in his own story for much of the book. His anger over the deception by his superior Darth Angral and conceivably the emperor fills a good amount of the book helping to flush this character out. He has a twi’lek slave and lover named Eleena Daru which, in the eyes of his rival Lord Adraas and his master Lord Angral, is a weakness of Malgus. She was injured in the attack on the temple, and Lord Adraas had sent her to a public hospital instead of the Imperial medical ship as Malgus had ordered. Malgus is forced to think long and hard about his role in the empire, his dedication to the Force, and what if any burden his love for Eleena has upon him.

The climax of the novel is when all four main characters are on Coruscant. Vrath reveals to Malgus that a Jedi is on her way to the temple ruins. This excites Malgus because the thing he seems to live for is conflict and combat, and the Empire’s peace treaty talks are irritating him.  Aryn and Zeerid lose his ship running past the blockade, and do an impressive escape from certain death. They do some recon and find videos of the Jedi slaughter in the works and learn of Malgus and Eleena.

Malgus and Aryn meet at the temple and fight forcing Aryn to withdraw.. She decides the best way to exact revenge is to target Eleena instead. Zeerid tries to talk her out of it, but it is of no use and the two part ways.

Aryn tracks down Eleena and at the last minute decides to spare her because killing her would betray what her Master had taught her. Malgus upon seeing leanring this let’s her leave, but says should they meet again he will kill her.

Zeerid finds a ship and makes to escape to his daughter. It turns out that the ship is Vrath’s and the two end up with a very well executed fight. Probably some of the best combat writing I’ve read in a while. Zeerid emerges victorious and airlocks Vrath as he knows of Zeerid’s daughter and cannot risk that information getting back to the Exchange or Hutts or anyone who might be looking for him.

Malgus, upon seeing Eleena after Aryn’s mercy, declares his love for her, something she had wanted the whole novel, and then he proceeds to kill her. The weakness of his affection could no longer be used against him by Angral, Adraas, or anyone else.

The aftermath of the novel shows Zeerid and his daughter, now in prosthetic legs working a farm on Dantooine. They are joined by Aryn who has left the Jedi order. And Malgus decides to turn his attention to cleaning house of those who oppose his vision in the Sith Empire starting with Lord Adraaas whom he kills.

Of the four main characters in the novel, I think we will only see Malgus in the game in any significant degree. We might meet Zeerid or Aryn for a one and done quest, but I wouldn’t expect much from them. Malgus however has been central to the cinematics and this novel. He is clearly an important character that players will learn of and maybe interact with as their personal stories evolve.

I think Malgus can and will serve as a chief antagonist for the Republic and the Empire. For the Republic he clearly is an enemy from outside, using his power and amassing forces that serve as a threat to their existence. For the Empire he could be cast off as a break away leader who leads a revolt, or possibly as an insurgent force within the power structure of the Empire. It will be interesting to see how they develop him in the game proper, and the novel does provide ample time in his head to see how he views the galaxy.

It is important to set proper expectations of a book like this. Obviously this isn’t going to become a classic of science fiction like The Foundation series or Ender’s Game, but for a Star Wars novel it was pretty good in my estimation. The characters were believable and well written. The plot had a few coincidences necessary for the story to unfold, but that shouldn’t be held against it. Action sequences were generally written well, though describing fights involving force powers seems a bit repetitive as everything is force augmented this, force powered that. Kemp’s action writing excels when writing for Zeerid and Vrath over any of the Force users. Dialogue seemed natural, not too cliche or cheesy.  If you are looking for a quick read that is fun, I’d suggest picking it up. 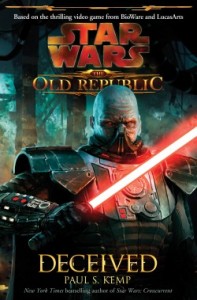