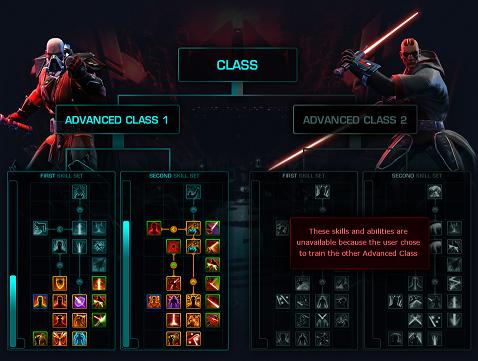 Skill Trees Will Allow a Lot of Flexibility

First off I want to remind everybody that each class has a total of 5 talent trees. Each advanced class has access to 3 of them, and only 1 of them is shared by both advanced classes. So to use smuggler as an example. Smuggler has 2 advanced classes: Gunslinger and Scoundrel. Gunslinger is known for the dual wielding(up close DPS) and trick shot (I assume powerful crowd control). Scoundrel is known for medicine and the scattergun (ranged DPS). So let’s assume (because I can’t remember what the advanced skill sets are called that the 5 for smuggler are Gunslinger(Dual Wield, Dirty Tricks) Scoundrel (Medicine, Scattershot) and Shared(Smuggler Core Skills).

So I roll a smuggler and at level 10 I choose. Hopefully they will give you a little playtest of each one, but at some point I make the choice and that choice is permanent and cannot be changed. This still allows me to “spec” different ways. I could be a DPS focused gunslinger or a Crowd Control focused Gunslinger, or maybe I’m a Gunslinger but more of a hybrid between two extremes. Like wise I could be a healing scoundrel or a ranged DPS scoundrel or a mixture. And I could be using companions to compliment my shortcomings so even though I’m a half ranged DPS half healing Scoundrel I always bring my healing companion and serve as the “healer” in a flashpoint.

Players Will Expect a Chance to Undo Mistakes

Why did I spec into Force Poke instead of Force Choke? I'm and Idiot!

So Bioware could, and I have no special knowledge one way or the other, say your advanced class is permanent, but how you spec within that advanced class can be changed for a price (and hopefully not an insanely high price). And in a sense they kind of have to allow some spec freedom because besides people will make mistakes, but they also make choices based on current game conditions and game systems will change as they play the universal mmo dev game of “continual balancing”. If I take a talent point in something and that talent is decided to be overpowered and they nerf it, I’m being “punished” for Bioware’s mistake not mine. Likewise if I decline to take a talent because it is garbage now, and Bioware buffs it later, why should I be punished for not being a true believer in the future upside of a current crappy talent?

We Need to Rethink How We View Advanced Classes

So I think the source of this problem in community perception has a lot to do with how we envision the game’s classes. We see Smuggler as the class and not so much Gunslinger or Scoundrel. But in reality the advanced class is what we will spend the majority of our time playing. Levels 1-10 (assuming you pick Adv Class at 10) is the introduction to game mechanics, and you are learning the broad strokes of what a group of advanced classes can do, only to make your real decision after you play a bit.

To illustrate this whole thing imagine in WoW that warlock and mage were combined to be the wizard class with warlock and mage being the advanced classes. At level 10 you choose mage school or warlock school, and then you get your three talent trees. One of those trees overlaps (fire damage), while two schools are unique to mage and warlock (mage gets frost and arcane, warlock gets DoTs and Pets). Now you can still respec in your school, you just can’t switch from mage to warlock. Now we don’t worry about this in WoW (if you want a mage, roll a new toon) because that permanent decision is made a character creation instead of level 10. SWTOR seems to be saying “We want you to get used to the broad category of a group of advanced classes, and then make your permanent choice.”