As Alvis approached the first raid I knew that I would be one of the two tanks for the instance. The other was my dear friend Cuspar. Both of us are Vanguard Shield specs with pretty much the same spec. But both of us took different approaches towards gearing. This article is intended to look at the pros and cons of the approaches we took and possibly draw broader conclusions from the experiences.

The conventional wisdom I got from various message boards, the official forums, and blogs I was reading was to take the following approach towards raid gearing: get as many orange pieces as you can, run dailies, mod the crap out of those orange pieces. Crafting was considered inferior to that approach. This might have been the result of either ignorance of real stat equivalencies within the theory crafting community, bias against crafting, or people just making stuff up since it was really difficult to “prove them wrong”.

Cuspar chose to follow the orange gear and mod it approach. I chose to go against the grain (and in the process worried our raid coordinator Furiel) and crafted a good chunk of my raid gear.

In the attempt to provide some measuring sticks by with judge how our approaches worked it is important to paint tanking in broad strokes of evaluation.  When you break it down to the gear composition there are two main goals you have as a tank. First is your ability to survive. The second is your ability to generate threat.

The Ability to survive can be measure by two metrics.

The first and easiest metric is effective health. Effective health only looks at two stats from your character sheet: health and armor. Armor reduces the amount of kinetic and energy damage you take. Since most enemies do those types of damage it is pretty useful to know what this is. If you have let’s say 10,000 hit points (hp) and you armor can reduce 25% of that damage it means effectively your health pool is really 12,500. If you armor reduces 45% your health pool is effectively 14,500 and so on. Or in other words a person with 10k hp and 50% damage reduction is the same as someone who has 15k hp and 0% damage reduction. Essentially effective health the bigger the better.

The second survival metric is a lot more complicated. It is called total mitigation. This metric looks at a wider array of defensive stats and essentially looks at how much of an incoming attack you will take on over time. I’m not going to get into the deep math on the formula but it essentially asks these questions in this order: First what is the chance that an attack hits you, and if it hits you, what is the chance your shield will proc? and if it procs how much will be absorbed by your shield? And after all that what is the amount that will be absorbed by your armor? The stats that factor into this equation as I’m sure you get by now is defense chance, shield chance, absorption amount, and armor mitigation. How much health you have isn’t taken into account because this is measuring more about how smooth your incoming damage is.

The second major gearing goal for tanks is threat generation.  Threat is measured by damage output. The base unit is 1 point of damage. A point of heal is approximately .5 a unit of threat. There are various things that alter the threat generation such as whether you have a tanking stance on, have a guard on you, and the range you are from the mob. The further you are from the mob the less threat you generate. For our comparisons Cuspar and I would be comparing Aim, accuracy, Crit Chance, surge, bonus damage etc. Threat generation is important for a tank since if you can’t generate threat your DPS will be capped in their output potential, and with tight enrage timers you don’t want to throttle DPS anymore than you have to. However the first priority for tanks is always to get to a point on survival where your healers don’t have a heart attack keeping you alive  before you switch to threat generation. This is derived from the “a dead tank is a useless tank” mmo maxim.

Cuspar had orange for all armor except belt and bracers. He also had an orange weapon. That is a total of nineeen slots to fill with armor mods, mods, barrels, color crystal, and enhancement. It took him two weeks of fairly regular grinding of dailies on Belsavis and Ilum to get the necessary pieces to start his gear up to where he was happy with it for the purposes of tanking a normal raid. The thing to know about Cuspar is that his time is limited. He cannot spend countless hours on running the dailies to cap on commendations every day. Like all of us he has other obligations including a job and family. So it could be done faster, and I’m certain others in Alvis were able to max out quicker than Cuspar. 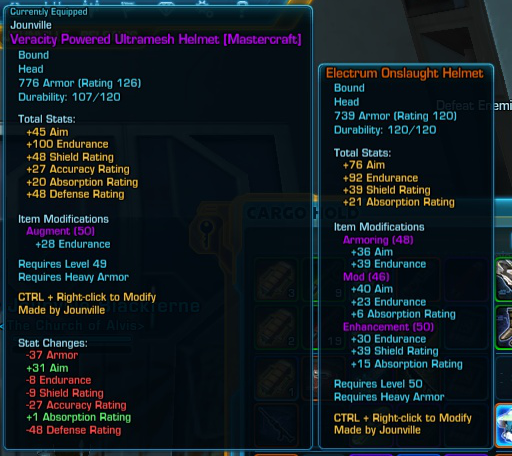 Cuspar’s end result was a larger focus placed on the primary stats of Aim and Endurance. His effective health was higher and his aim was higher meaning he should be able to do more damage than me. For all the gearing suggestions we could find going into the first raid his stats pretty much always lined up. Tanks seemed to be judged based on their health and armor alone, and not based on other stats which might make them harder or easier to heal. He was fitting all the conventional wisdom perfectly on what to do to be prepared to tank normal operations.

I’ve bet on the crafting game. I know that at some point the raid gear will exceed what I could possibly craft, but I’m used to a template of raid preparation that says entry into endgame can be accomplished through crafted gear. I took armormech, scavenging, and underworld trading and had all at 400 before 50. I was already in the REing for entry raid gear before I finished Voss. This is not a cheap approach by any means. First gatherign materials is expensive. Materials range in price to gather from 200-500 credits per unit depending on what it is, and if you need to buy materials off the auction house you are looking at that per unit cost doubling at least. Highly rare materials like Mandolorian Iron routinely sell for 10k+ on our server. 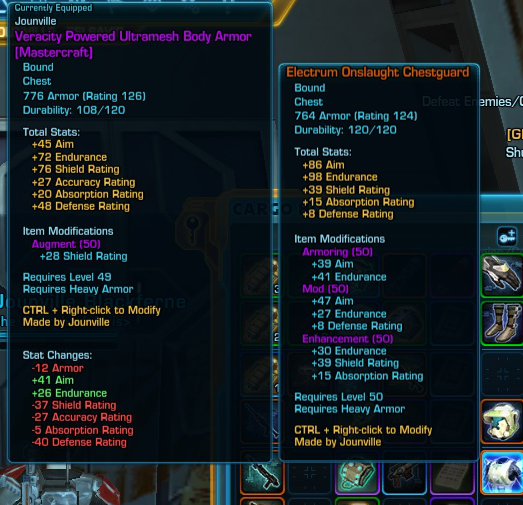 The results were different than Cuspar was getting as well on his gear. While Cuspar’s base stats were higher, and as such his health pool and effective health were higher, my stats at avoidance and mitigation jumped out as higher. This created a perception on a casual glance that my gear was not ready. In fact Furiel told me to get a new chest piece since the Mastercraft Veracity Powered Ultramesh Body Armor I made only had 45 aim and 72 Endurance. I had to point out the secondary stats like +27 accuracy +20 absorb +48 defense and +76 shield to create doubt in his initial impression about my gear.

My effective health was lower than Cuspar’s by nearly 4k going into that first raid. But my total mitigation was 2% more. I had nearly 5% more chance to dodge an attack altogether and my chance to shield was 3% higher. These might seem like small differences, but in a key position like tank, every percentage point counts.

So given the conventional wisdom and now general unease of our raid coordinator, why did I continue to push for the crafting gear plan? Well a few reasons. First time was running out. Our first raid was approaching quickly and I didn’t have the time needed to run the necessary dailies to mimic what Cuspar was doing. Second I think that secondary stats were being undervalued, and crafted gear generally has better secondary stats than can reasonably be achieved with orange gear. And finally I felt that I needed to know if where all my money and time reverse engineering was a waste. Bioware in a sense had to prove to me that they cared about crafting, and if I could tank in an operation in mostly crafted gear, then I knew they had planned stuff well.

The first Alvian Operation came on February 25th, 2012. Cuspar and I were both ready and I was nervous if my bet would pay off. As a raid we had two tanks with different gearing strategies. Also we had two tanks with different tanking in an mmo histories. Cuspar hasn’t really played an mmo since SWG and that was nothing like the group dynamic SWTOR has adopted. I on the other hand tanked many raids in WoW and had experience in improvising in raid settings. 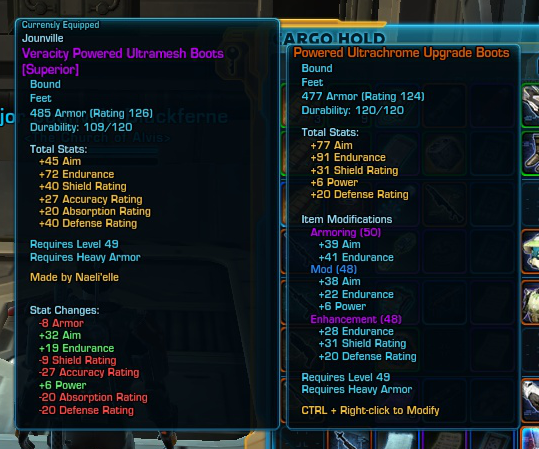 The toughest pull in Eternity Vault for us was the turrets. And I seemed just as durable as Cuspar. Neither healer complained I was a paper tank, or that Csupar was simply a giant health pool with no real mitigation. Through the operation I did take a back seat to Cuspar’s tanking on the one tank fights, acting more like an tutor on how to tank in case he needed guidance, but gearwise I was never at a disadvantage it seemed.

In the end I think crafting or modding is a viable method to get ready for normal operations. The  real puzzle at this point is figuring out what the real comparative value of stats are. Without combat logs and the math models that come out of them, it is really hard to say 1 point of endurance is worth 3 points of shield is worth 6 points of defense, or whatever the stat equivalencies are. I think in general people tend to undervalue their secondary stats. A lot of Aim, or Endurance, or Cunning is great, but being able to get crit, power, alacrity, shield chance, surge etc is what can take you from doing well to doing great.