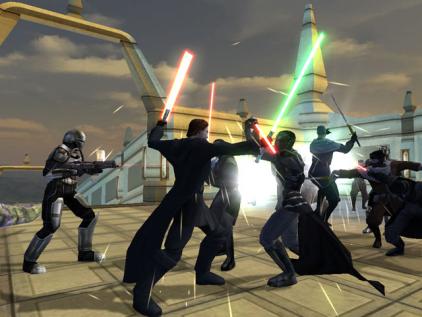 In recent conversation with a guildmate who hasn’t played an MMO in earnest since Galaxies, he confessed he was afraid that his lack of Warcraft experience would hinder him as he went higher in level. This prompted me to want to write a primer for how group play in MMOs like SWTOR generally work. This is intended to help close the knowledge gap between the WoW vets and the people who skipped that.  Some of the information may seem obvious or elementary, but it is all building to more complicated concepts later.

In group play there are three main roles that people play. Either you are designed to take damage, heal damage, or deal damage. We commonly refer to these roles as Tanks, Healers, and DPS respectively. Unlike in single player games, where at some point you become a god, MMOs divide up the jobs over different classes so people specialize in something and have only moderate abilities if any in the other areas. Tanks for example have talents and equipment designed to reduce that 1,000 point hit down to 750 or even 500 points. They tend to focus on having more health than other roles as well. But the cost to those abilities is they can’t heal themselves and their damage is mediocre compared to a character designed for DPS. Let’s take a look at what the roles do.

Tanking in a Nutshell

If MMO combat was a dance, the Tank would be the one leading. They often plan how the enemies will be pulled, they designate which ones will be crowd controlled, and they decide the kill order. But a tank’s main goals are two fold really:

The staying alive is partly up to the healer who we will cover later, but also up to the tank. Tanking in general is a very equipment focused role. Your gear directly influences your health pool, armor rating, and your ability to dodge, parry, deflect, or absorb attacks.

In addition to the gear, they also have talents designed to increase their survivability. It may be a talent that adds a debuff limiting the damage output of an opponent. Or it may be a talent that massively reduces incoming damage. Some will be passive requiring now work at all, while others will be something you want to use in special circumstances.

The final part of the staying alive job is knowing when to use your cooldowns. Cooldowns refer to special abilities that cannot be used more than once a minute. These tend to have big effects and should be used judiciously. Warding Call for a Jedi Guardian is an example. It reduces incoming damage by 40%, but can only be used once every three minutes. You would want to save this for when you need it and not just use it every time you can.

Keeping enemies hitting you is the second job a tank must master. Think of enemies (or mobs as they are often called) as having little lists of who they hate most. They will generally always attack the one they perceive as being the biggest threat. If the enemies were rational they would realize that the healer should die first, then the DPS and save the tank for last. But mobs are not terribly rational and we have tools to make them think the low damage guy in heavy armor is way more of a threat to them than the sneaky smuggler who just two shot his friend. Having the mobs attacking you is often referred to as having threat or aggro. One of the key skills a tank must master is when to use his taunt. A taunt forces the mob to switch who it is attacking towards the tank. This is really useful when an enemy is pummeling your healer and you want to redirect it to yourself.

Healing in a Nutshell

Healing is key to any advanced encounter. A good healer can keep bad tanks standing and dumb DPS alive through some rough patches, but a bad healer can let the tank die from simple neglect, wiping the group. The key to healing is knowing your priorities. A healer’s first job is to stay alive. A dead healer does no healing. A common ‘ailment’ of healers is tunnel vision. They get so focused on keeping everyone else alive and watching health bars they neglect to notice they are standing in the fire. The second job is to keep the tank up. Remember tanks are so much better at taking hits than anyone else that in many fights a good tank and healer can finish a fight long after the DPS has died. It may be close, but barring a fight mechanic like an enrage timer or the healer running our of resources (force power, ammo, energy etc), the tank and the healer can often finish the fight. That said keeping your DPS alive really does help.

The key to being a good healer is knowing how much to heal and when. Some fights are just a steady trickle of damage which can be responded with a regular heal. Other fights have large spikes of damage, but they are less frequent. Those might require a large powerful heal to respond, after which the healer goes easy in order to restore the resource pool for healing. Each healing class has strengths and weaknesses. Some are good at AoE heals (an area of effect heal that can heal multiple targets at the same time), others specialize in heals over time (HoTs) which are good for keeping people topped off. Some have really good single target heals but might not be as strong in other areas. It is important to learn the playstyle for your healing class and knowing which heal is the right way to respond to a given situation.

DPS in a Nutshell

The first thing to know about being DPS is minimizing your incoming damage. If you are the Jedi Knight who insists on standing in the lava for some reason, you are going to irritate your healer who will have to choose between throwing heals at the tank or you. In that case you will lose and you just made the rest of the group’s job harder. Now you can’t always avoid damage. There are plenty of reasons you might take damage. Grenades have splash damage, things fall form cave roofs, and you might have to off-tank something for a second until the tank can pick it off you. Put the important thing is to try and keep it to a minimum.

The second fundamental is mastering your crowd control abilities. The tank may think they are indestructible, but I guarantee you that if enough enemies are hitting him, they will die. Crowd control makes this easier. Before a pull the tank might mark up mobs and tell you to crowd control (force lift, cryo grenade or something else) a particular mob. That essentially reduces your number of enemies everyone is fighting for some period of time. The tank is happy because they have one less thing to worry about, the healer is happy because that is one less source of damage. Keep your target crowd controlled as best you can until the tank turns the groups attention to it. Which leads us to…

Focus fire on the right target. The thing about mobs is they do the same damage output usually whether they are at 100% health or 1% health. The most efficient way to get rid of them is crowd control up some of them and then focus fire one mob at a time until it is dead. Sometimes with many weak mobs it might make more sense to just use area of effect abilities, but when dealing with strong, elite, or champion level mobs, focus firing is the best way to go. Make sure you stay on the right target, and don’t break someone else’s crowd control.

If you do those three things you will get a reputation as being a good DPS player and people won’t think of you as easily replaceable.

It seems like Bioware likes to mix the difficult of mobs in flashpoints and heroic quest zones. A strong mob might be surrounded by a few regular mobs. An elite or champion may have a few strong mobs surrounding it. It has been my experience that the best approach towards killing them is to work from weakest to strongest. Crowd control elite mobs and strong mobs if you can and focus on the regulars first wiping them out quickly. As soon as you cannot crowd control the strongest mobs in the pull, have the tank focus on that. A DPS can easily offtank regular mobs since it is just a few seconds of incoming damage before they drop. Stong and elite mobs however generally need a proper tank to absorb the damage.

I hope this helps lay a foundation for group play for players who are new to mmorpgs and want to make an impact in group play in SWTOR.